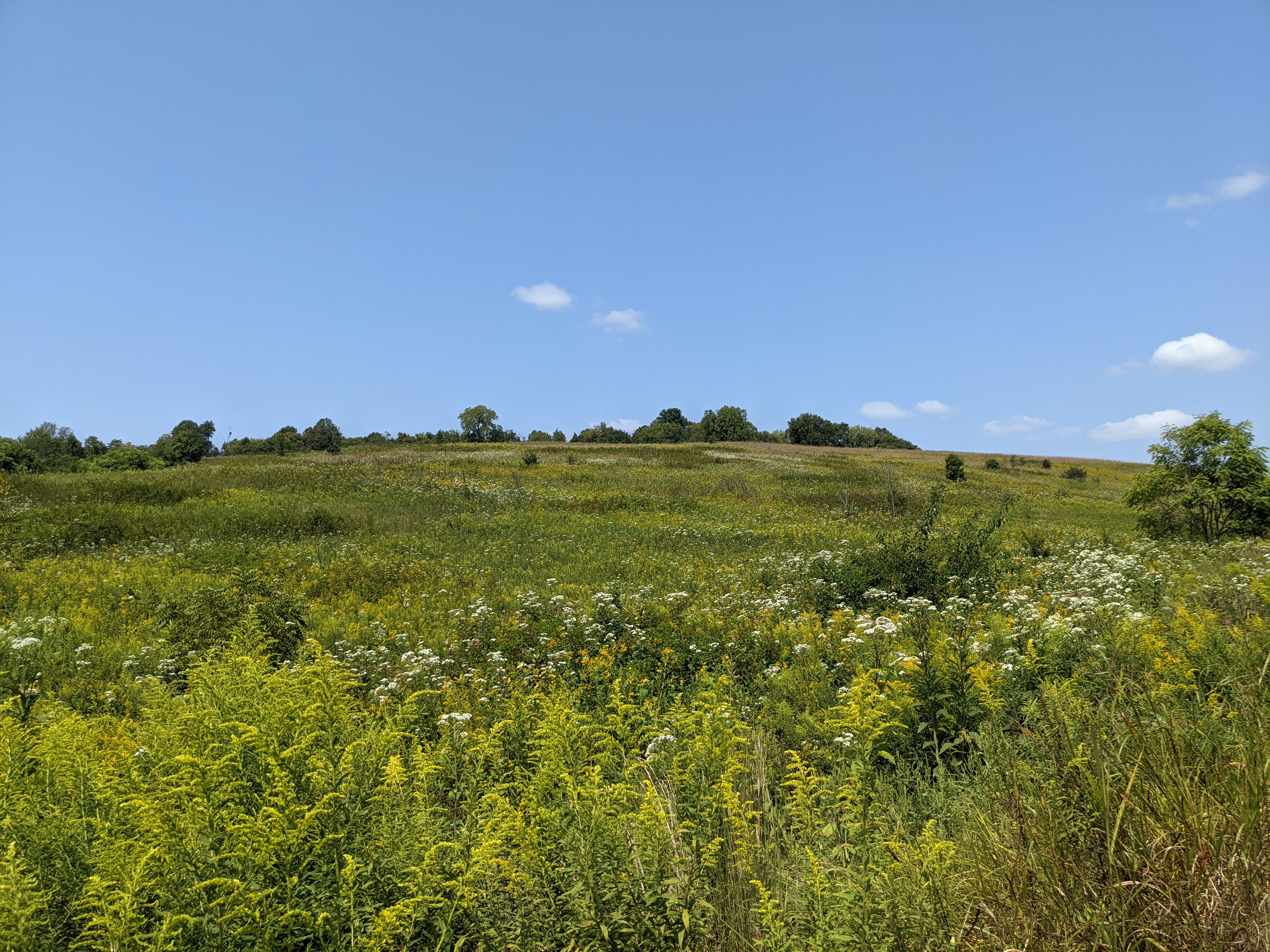 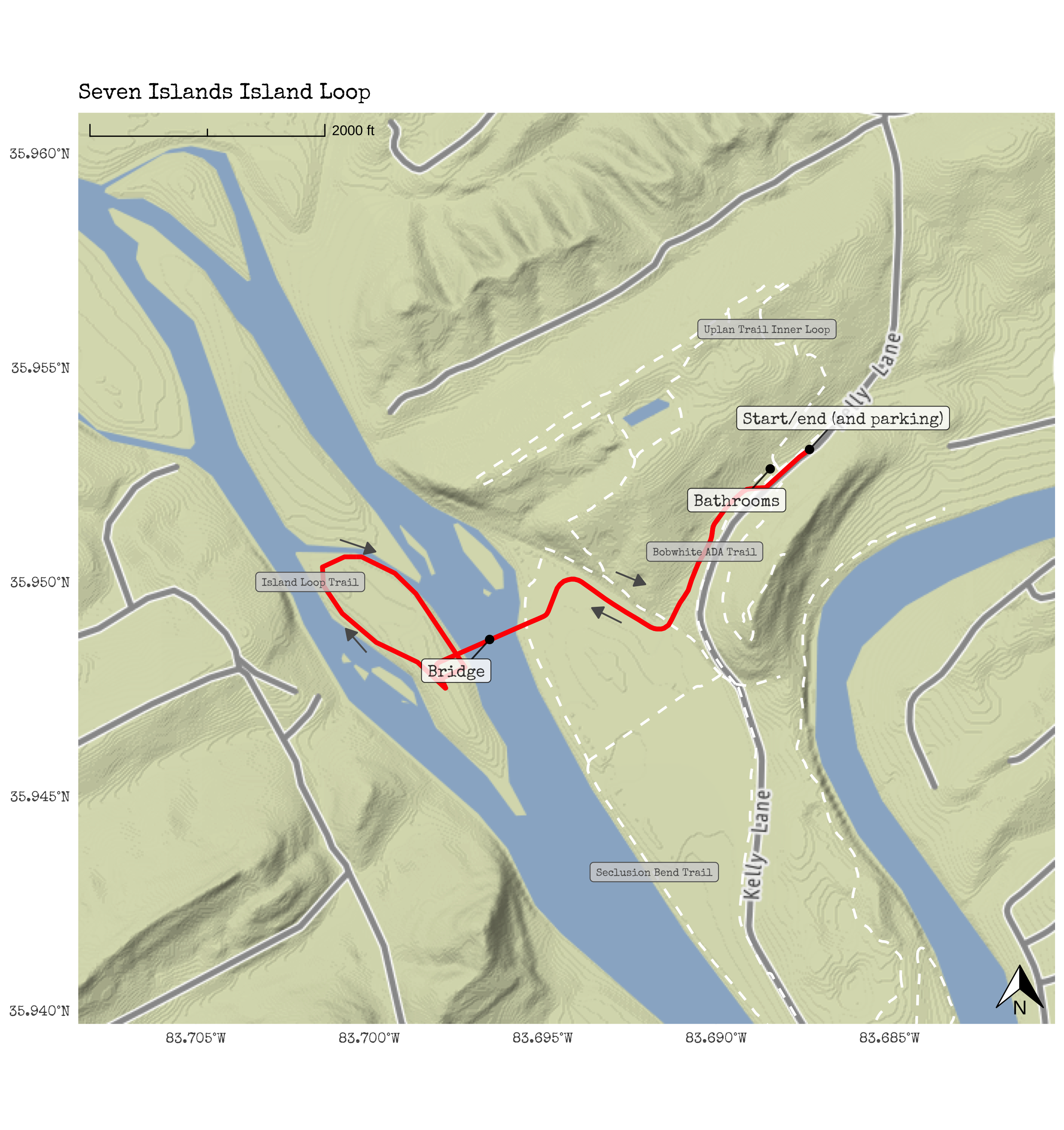 By the time we had lived in Knoxville for several months, we had taken a trip to the Abrams Creek area of the Smokies and, closer to home, to Ijams (see the chapters on Abrams Creek and the Ijams Quarry and Ijams Loop trails). One of us (Katie) had heard about Seven Islands—a state park close in Knox County. We learned a bit about it online but still had questions. For example, what is a birding park? Is it just some farmland with a couple birds? And should we not instead take a trip back to the Smokies?

Upon our first visit, we fell for Seven Islands State Birding Park, also known as Seven Islands. If we had to pick one trail to recommend to friends around Knoxville who are new to hiking, it would be this one at this location. More wild locations, more expansive vistas, and locales with more amenities are accessible from Knoxville. However, few have so many positive features in one place: a beautiful location on the French Broad River, views of Mt. LeConte in the Smokies, and several ways to extend the hike. Furthermore, the trail is just a 30-minute drive from downtown Knoxville.

The French Broad River starts far away to the east and south of Seven Islands, just south of Asheville, NC. It passes through Asheville, collecting streams and creeks that flow from the Pisgah National Forest that surrounds that city. Finally, it enters Tennessee and collects rivers and streams that flow from the Smokies, including the Pigeon River that accompanies I-40 on its route between Asheville and Knoxville, and the West Prong of the Little Pigeon River that passes through Pigeon Forge and Sevierville. When the water is especially clear in the French Broad River, it is easy to envision its sources in the mountains that can be seen not far away on the horizon.

The trail we highlight is a particularly accessible yet also highlight-rich one. There are two primary trailheads at the state park, one near an open barn at the start of a long, paved path; the other is on the French Broad River and is the place to start paddling on the river. We start at the trailhead near the open barn—not the one near the river.

As we mentioned, this trail starts on a paved path The trail winds down through open meadowland, with a steep and wooded ridgeline to the left and rolling meadows to the right. The paved trail meets a bridge over the French Broad River to an island that is part of the park. Then, the trail loops around the island on a path about as flat as one comes in the region. Finally, the trail returns to the bridge along the same paved path that you descended on earlier—this time with a climb back to the trailhead.

This trail is excellent for families with young children or for taking older family members on what feels like and is a real hike, but in a way that will not be too challenging for those newer to hiking. It is great in all seasons, staying warmer than almost any other trail in this book in the winter. It can be hot in the summer, but the breeze along the river makes the trail a bit cooler than other locations in the Tennessee Valley (of which Seven Islands is part). This is, clearly, a great place to see birds; deer are easily visible in the meadows, and it is hard not to see giant bass and carp when crossing over to the island on the bridge.

8.3 Getting There and Parking

The drive from Knoxville is easy. Follow I-40 east, until one leaves the interstate at exit 402 and drives around two miles Midway Road. Here, though brief, the drive can become a bit confusing. Turn left onto Maple Road, staying on this road for just under one mile. Then, turn right onto Kodak Road, turning left onto Kelly Road to arrive at the parking lot. Park in the large lot. We have never had trouble finding a spot even on the busiest of days. The address of the parking lot at Seven Islands is: 2809 Kelly Ln., Kodak, TN 37764.

Start at the barn beside the parking area. Note the native landscape and birdfeeders—here is a great place to see birds, but it is far from the only spot you will see them.

Note the trail heading up into the rolling meadows on the right. This trail leads to the Upland Trail Inner Loop, a 1.2-mile trail that connects back with the path we will be on. It also offers the option to connect to the Upland Trail Outer Loop, further extending the hike.

From the Upland Trail Inner Loop are great views of the third-highest mountain in the Great Smoky Mountains National Park. Mt. LeConte is a great peak to teach kids to identify for two reasons. First, though it is not quite as tall as the higher (well-known) Clingman’s Dome (much less famous) Mt. Guyot, it is arguably the most unique and even special of the mountains peaks in the Smokies (Wise and Petersen 1998). It is also usually much easier to identify than other mountain peaks in the Smokies because it has four subpeaks that make it appear as a crown: Myrtle Point, West Point, Cliff Tops, and High Tops—the last which is the highest of the four. You can see Mt. LeConte on the left side of this image from the Upland Trail Inner Loop–just to the right of the hillside that blocks further views of the mountain range.

Note that there are bathrooms on the left just past the barn (see the trail map). They are usually clean, but they are rustic.

Walking past the two side trails we mentioned and the bathrooms, continue along the paved path, noticing that the grad of the path starts to decline slightly. You will have walked a total of .40 miles when the trail begins to flatten—and turn to the right. Note the bench to catch a quick rest at this bend in the path. This is a great spot right at the forest’s edge to view birds. From spring through last summer, much of the time, see wildflowers in or at the edge of the meadows. 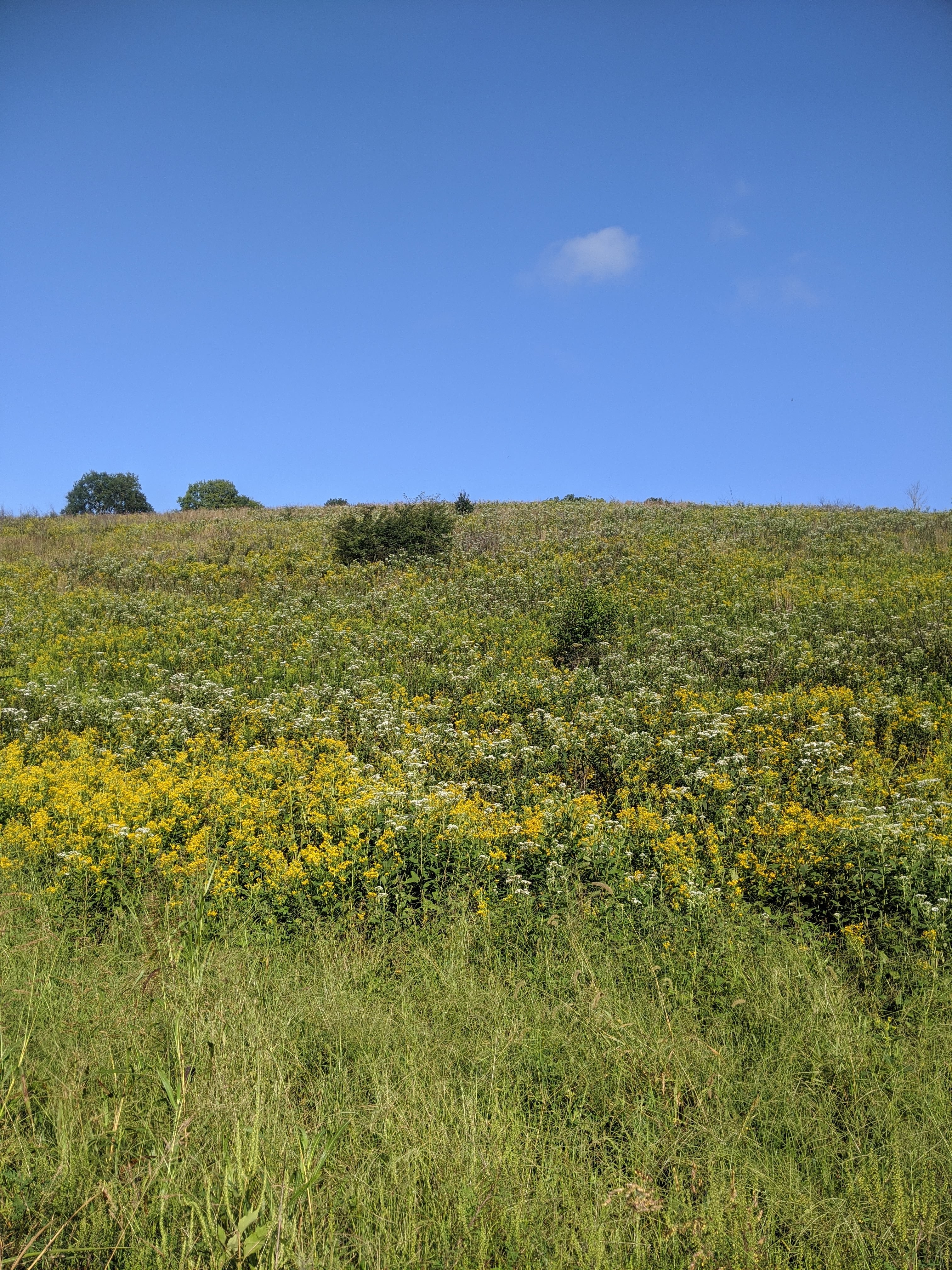 Figure 8.3: Wildflowers in Bloom in Late Summer at Seven Islands

According to naturalists at Seven Islands, over 190 unique species of birds have been identified at the park (“Birds of Seven Islands State Birding Park” 2021).

For older kids, there are many mobile phone apps that can help you (and them) identify birds by sight or sound. We recommend the Merlin Bird ID app by the Cornell Lab of Ornithology, which creates several useful resources and apps related to birding and conservation. Even young children may like to hear the variety of calls and songs of birds common to your location and time.

The path continues on a more or less flat but gently winding path toward a key point, the bridge crossing the French Broad River at 0.70. Constructed in 2019, the bridge—like the path—is compliant with guidance in the Americans with Disabilities Act (ADA) on accessible design; in this case, a path that is accessible by individuals who might find it difficult or not possible to walk on a rocky, unimproved surface.

The bridge is not only accessible, but it is also pretty to look at—and, it is pretty long: around 400 feet. The bridge is designed to allow you to pause and view the river and the birds. There are numerous small overlooks along the course of the bridge. In addition to spotting birds around or in the river, when the water is clear, fish are usually able to be spotted, angling their bodies (and mouths) upstream amidst the marine plants to catch food. 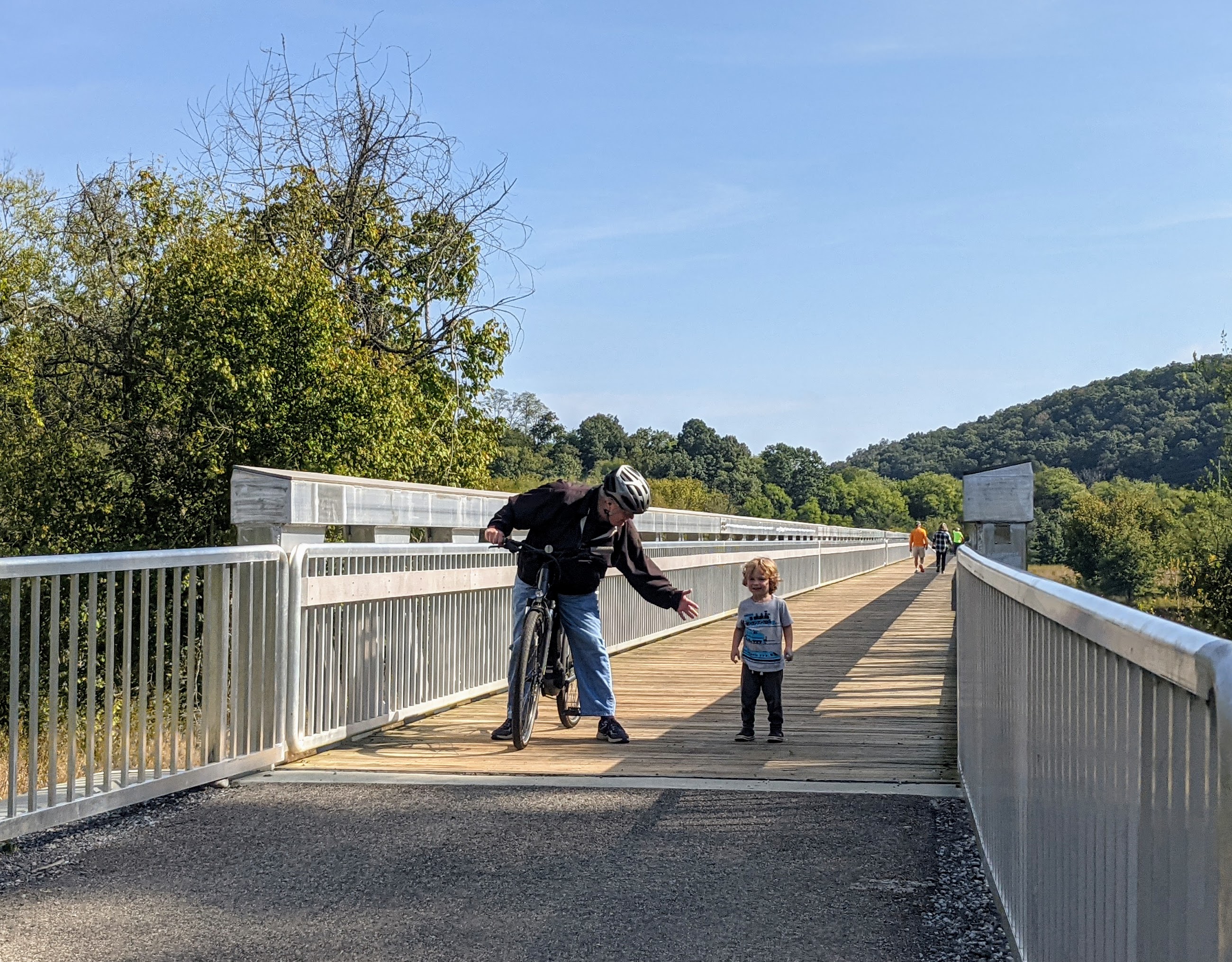 Figure 8.4: The Bridge Across the French Broad River at Seven Islands

At .80 miles, arrive on the island—named Newman’s Island—still on a paved path.

You may be expecting to see, well, seven islands at Seven Islands. But, there are now fewer than that—three or four, depending on who is counting. This is because in the 1930s, the Tennesee Valley Authority (or, the TVA) began to construct dams along the Tennessee River, not far upstream from where you are now standing. That dam is called Cherokee Dam and is around 200 feet high and more than one mile wide. The dam took only 16 months to build, being completed in December 1941. Unfortunately, the construction of the dam caused the water levels to rise, flooding some of what were previously islands.

The path curves off the bridge and reaches a sign that signifies that here, at last, the paved portion of this trail ends, and the part of the hike that is on a relatively smooth, flat, but dirt surface begins. We usually turn right at the sign, though you can walk in either direction; our description of the trail proceeds this way.

There is a special spot soon after you turn right: a paw paw grove! Paw paws are a native fruit related to bananas. When resting by the river, we once saw a family reach up to graba and then enjoy several paw paws. If you are interested in learning more about Paw Paws, check out an excellent podcast about this (now) uncommon but native fruit by “Pick a Pawpaw: America’s Forgotten Fruit” (2021). 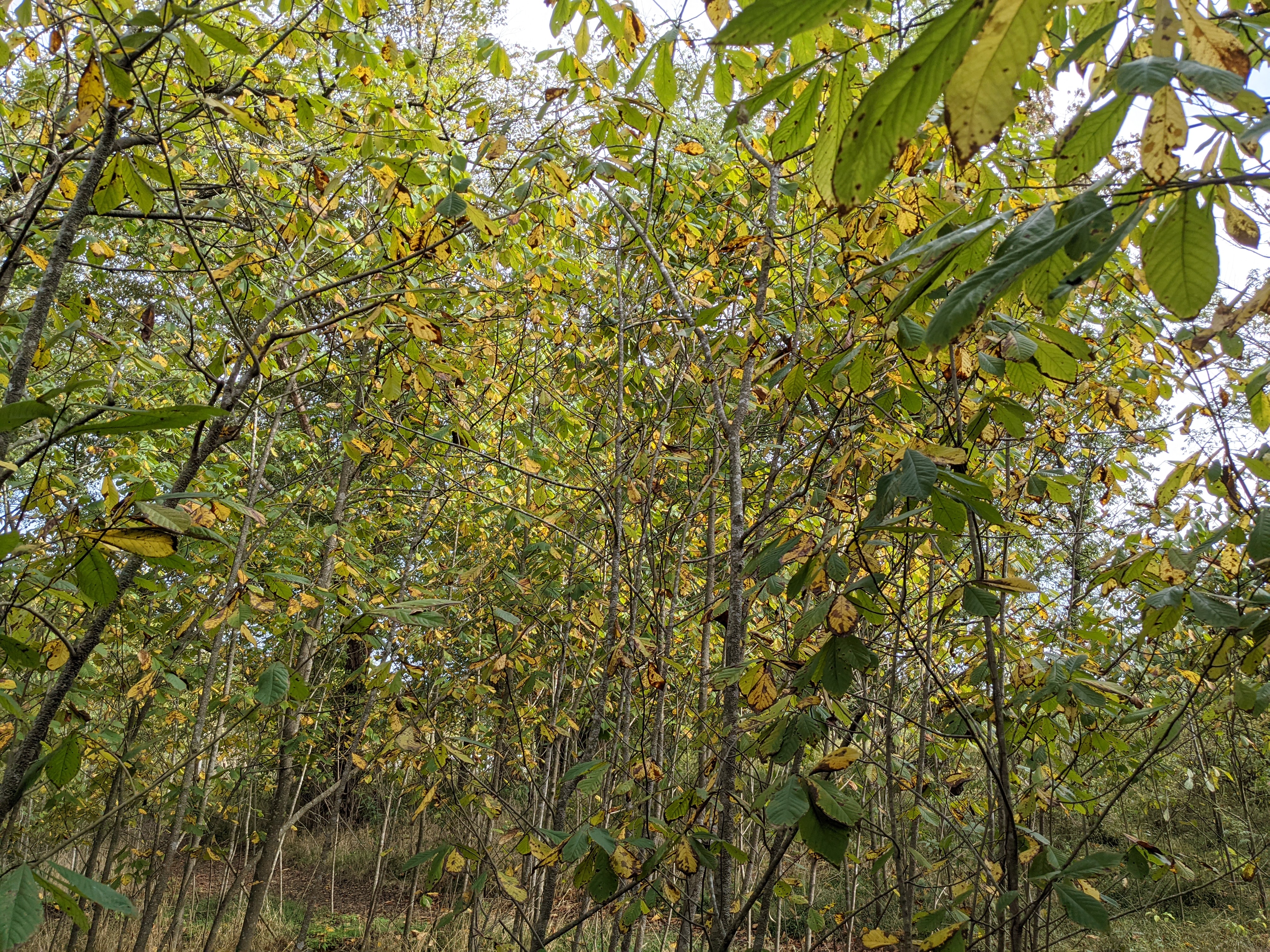 The path here is near the water, and this area and the river beside it are nearly always tranquil. 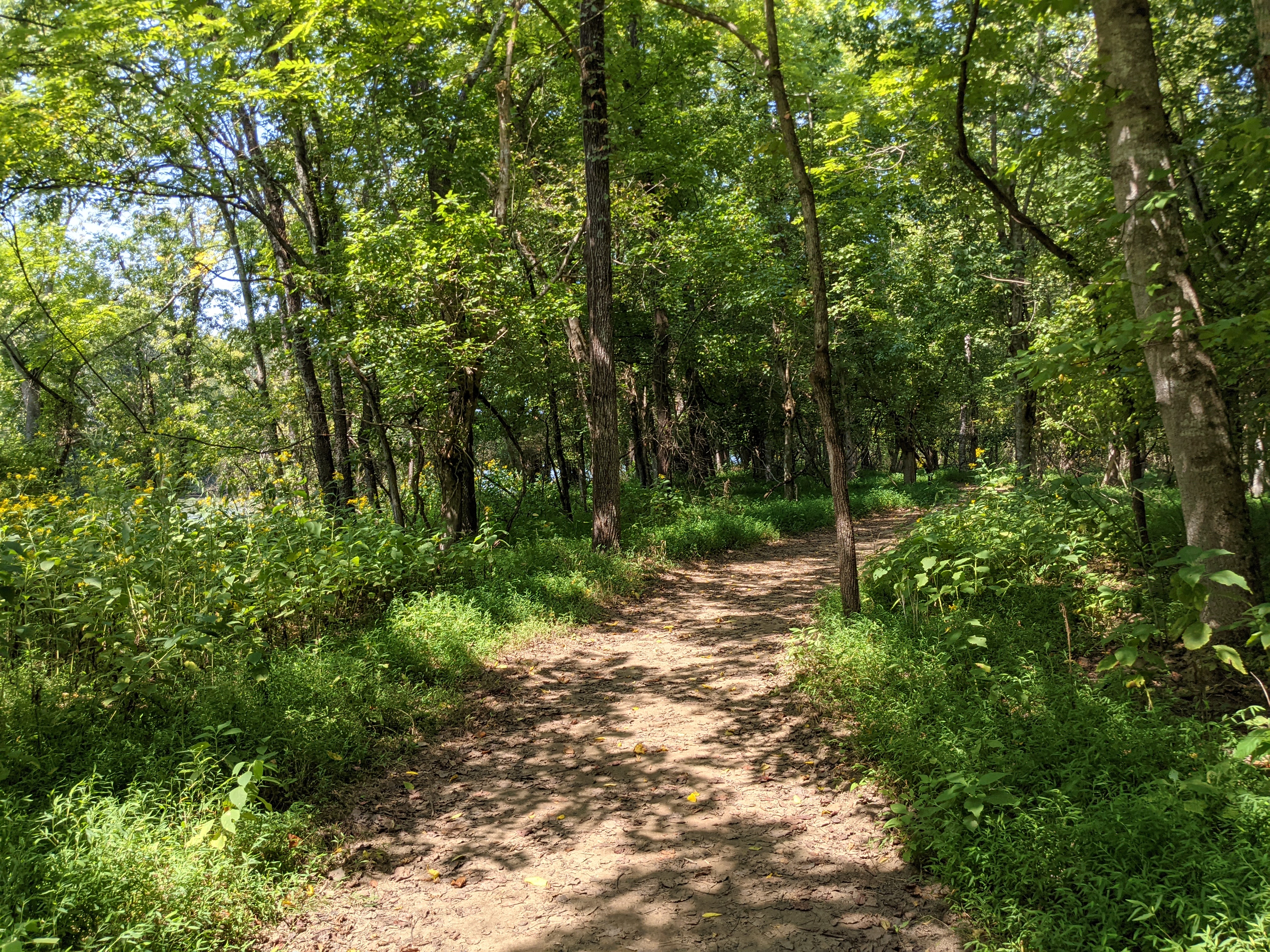 Figure 8.6: The Trail on Newman’s Island

Note that there are several benches and many short, unofficial (sometimes called “social”) paths leading to the river.

Continue to a spot that can be fun with younger children—a stick house at 1.0 miles that has stood the test of time (at least since we started visiting Seven Islands around three years ago through the time of writing). If it’s not there when you visit, consider constructing a new one! 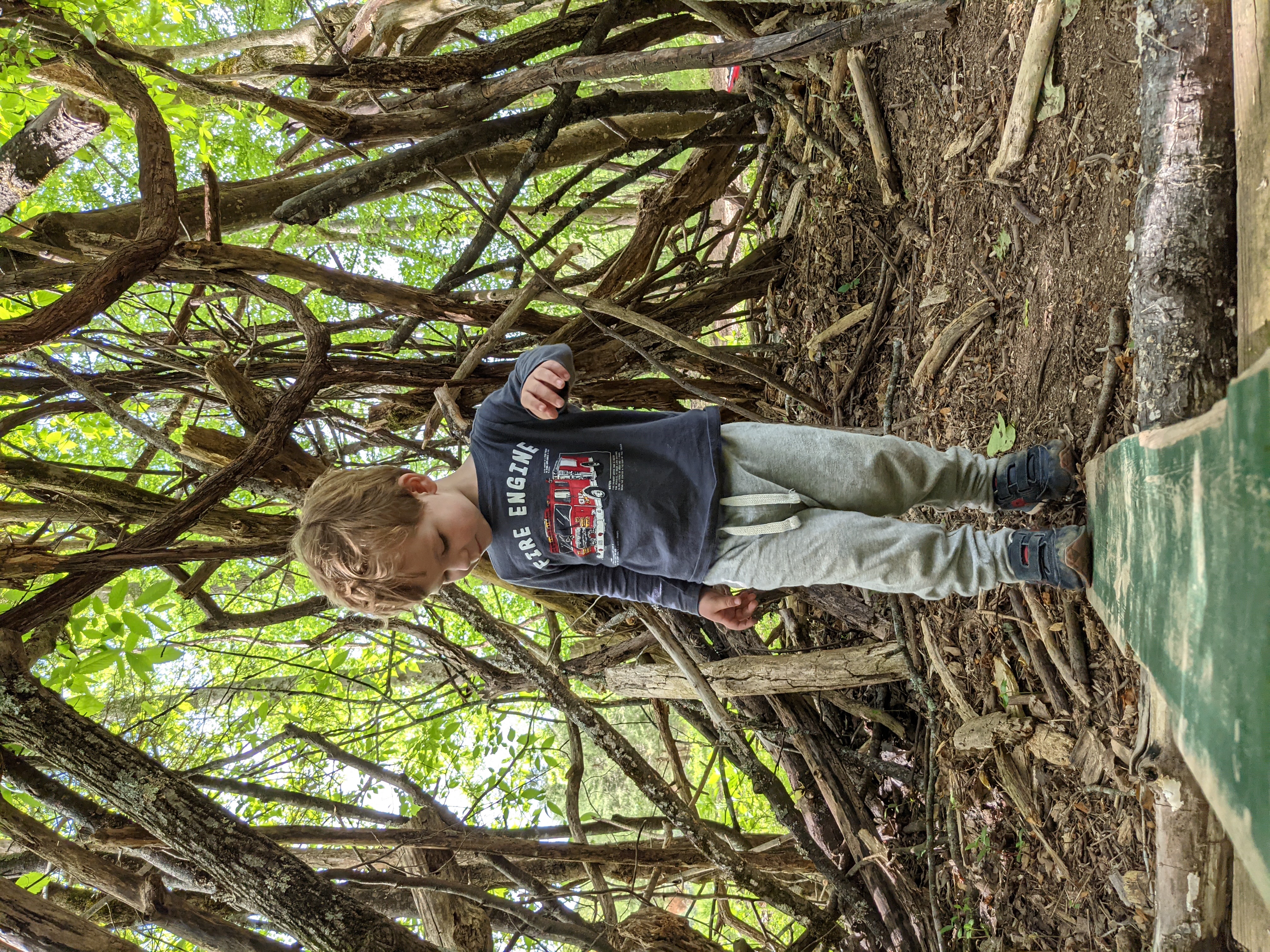 Figure 8.7: Playing in a Stick House

At 1.20 miles, arrive at the island’s tip, where the two channels of the river made by the island meet again. The channel on the side along which you have been walking was larger than the channel on the other side; here, the river almost appears to be a small stream, not the large French Broad River that drains much of the creeks and streams that flow out from the Smokies and the mountains around Asheville, NC. 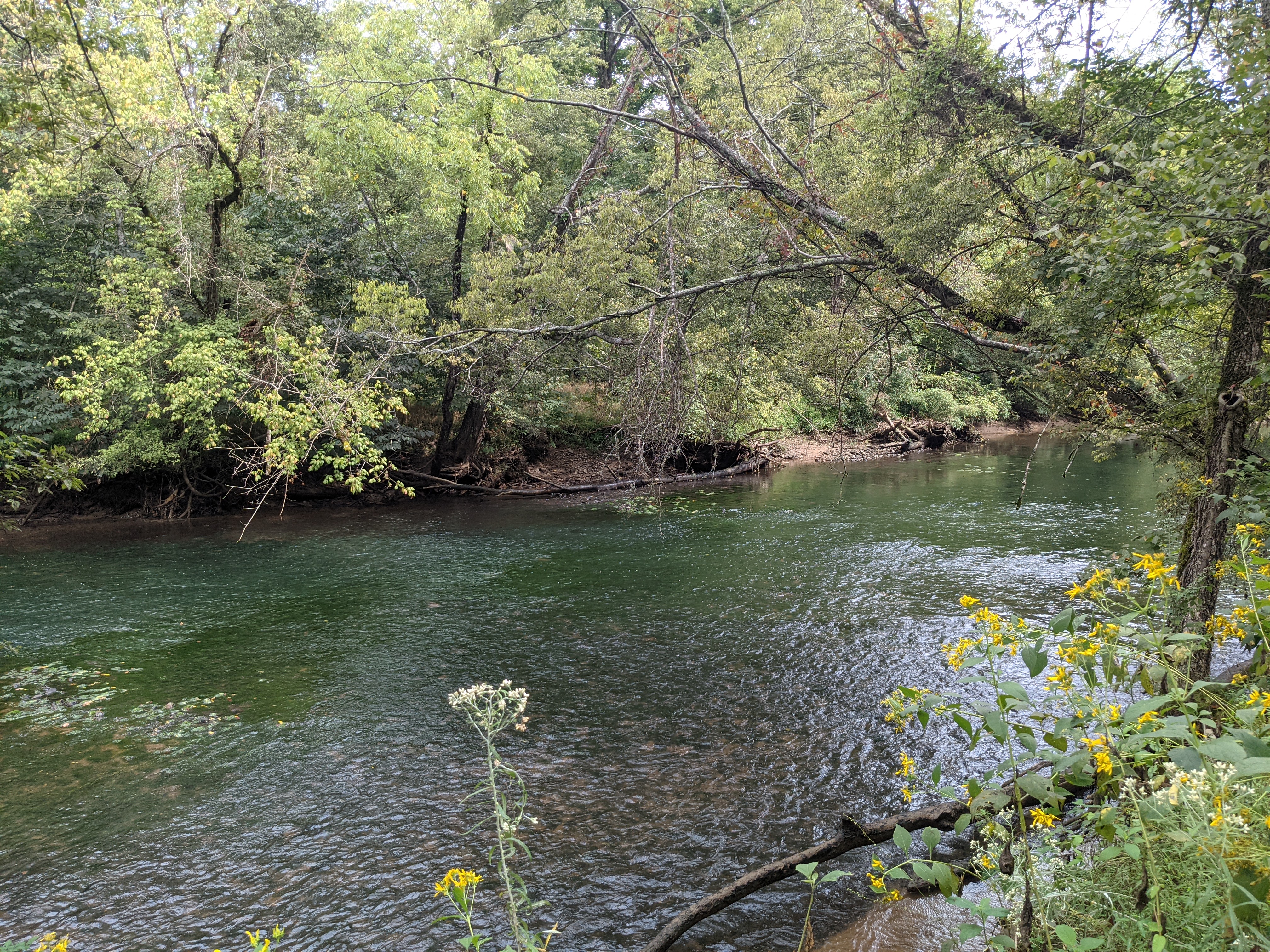 Figure 8.8: One Channel of the French Broad River

There are often pretty wildfires in the spring and late summer along this part of the trail.

At 1.5 miles, cross under the bridge you walked over earlier. The path winds back up to the sign you met earlier—and the paved path. Walk back over the bridge, along the mostly flat, winding part of the path, and up what is now an incline back to the barn at 2.40 miles. Here, you have the chance to add a few additional short hikes or to stop.

You may consider grabbing a bit to eat before heading home—there are not many places to stop for lunch or dinner on the way home. But, in between bites of packed sandwiches or trail mix, you might ask yourself, where does Seven Islands fit with the breathtaking Smoky Mountains and the wild Cumberland Plateau nearby? Right in between, which is a part of what makes Seven Islands different. This difference means that it is easier to get to than any other hike apart from those within the immediate Knoxville area, and though a short drive from Knoxville, it suggests that Knoxville is not only unique because of what surrounds it but also what is closer to home.

While close to Knoxville, not many other destinations or activities are nearby, though there is more than one could do at Seven Islands. 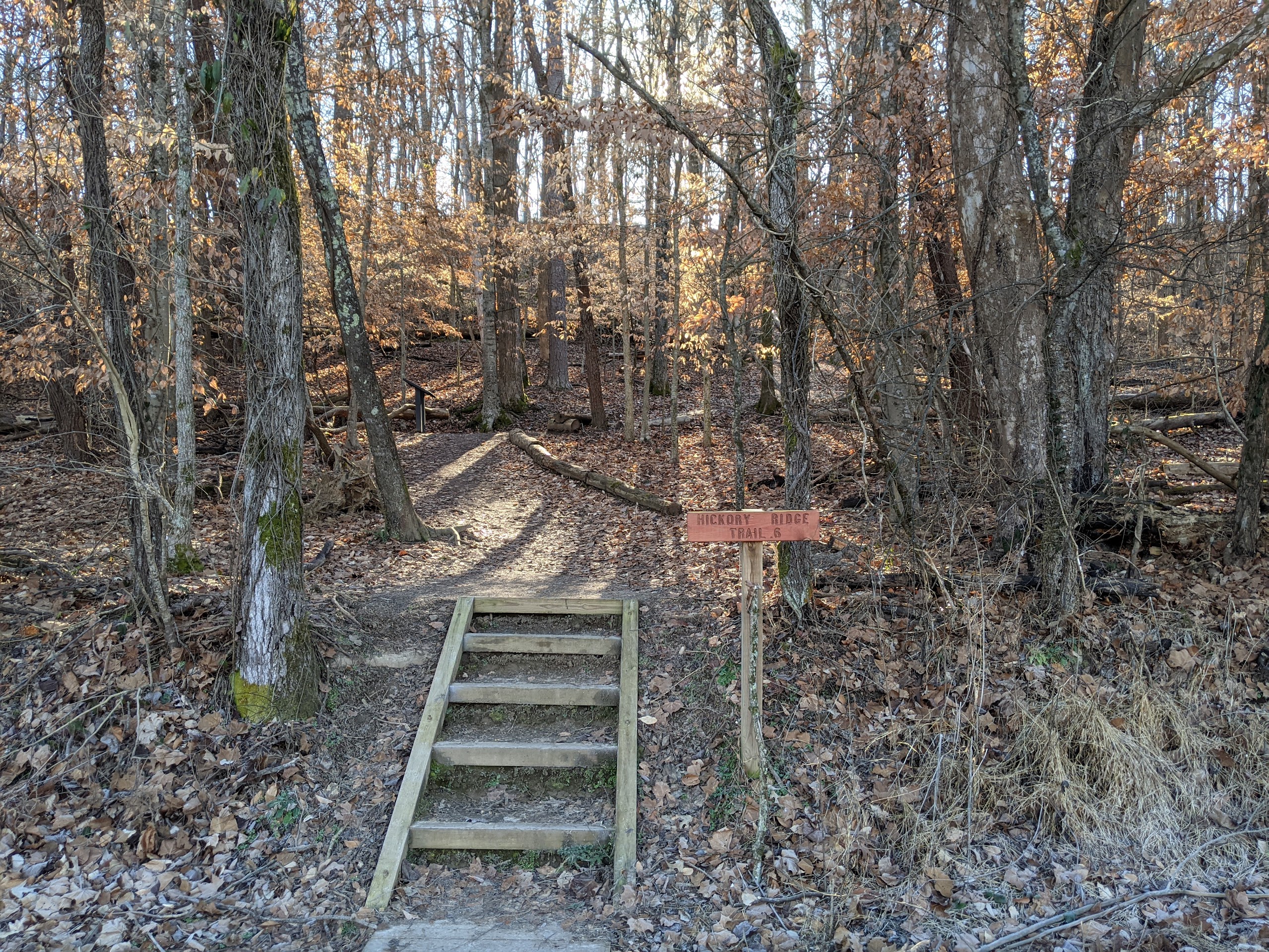 Figure 8.9: The Start of the Hickory Ridge Trail 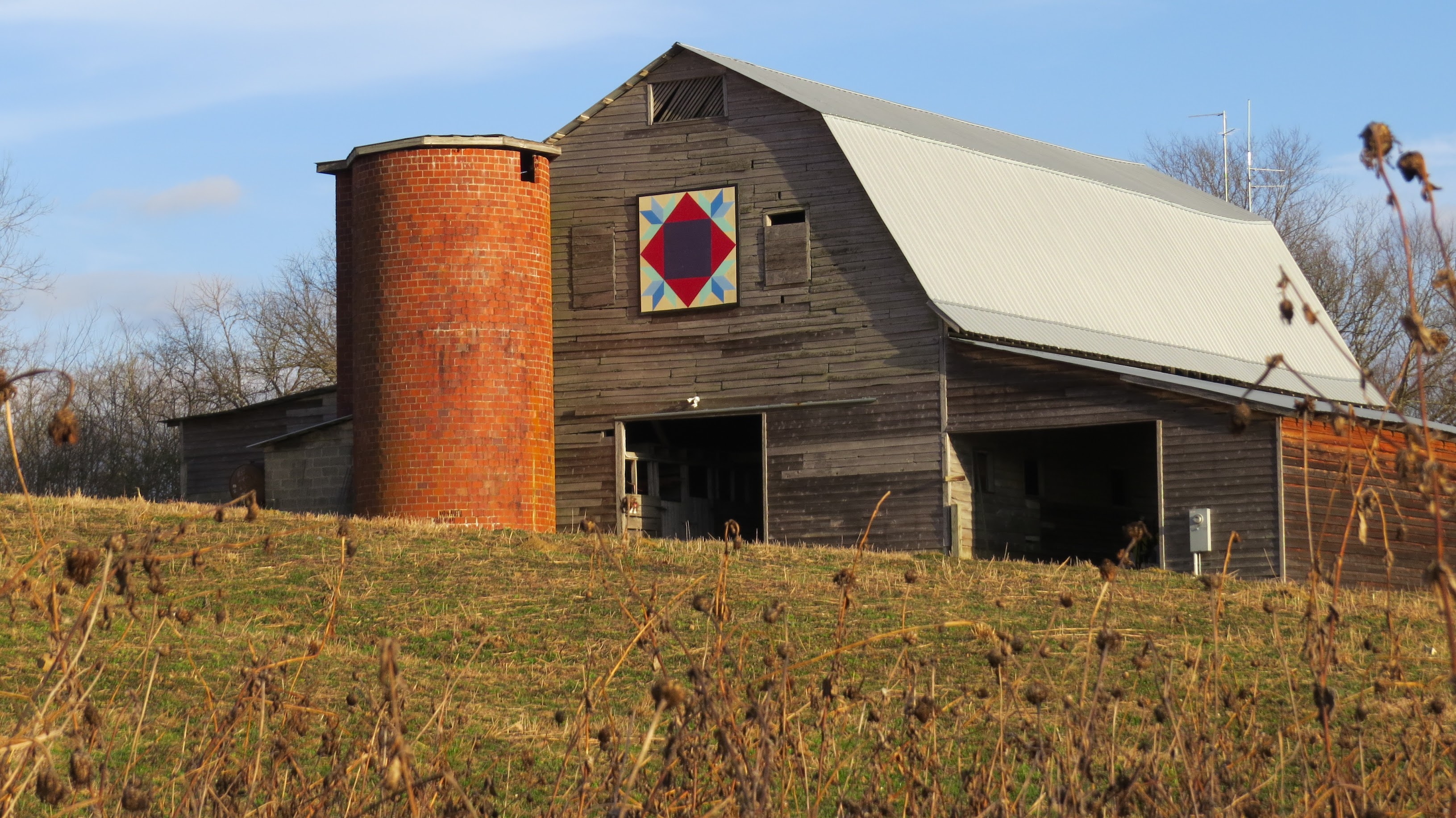